The USC Law & Global Health Collaboration hosted a panel to shine a light on some of the exemplary work happening right here at USC around sexual and reproductive health and rights, at USC on November 7, 2018.

Our panelists exemplify the value of attention to the legal environment and to global health in addressing sexual and reproductive health and rights (SRHR) topics! The discussion brought attention to the global use of rape as a weapon of war; the commodification of women’s bodies through surrogacy in Mexico; and the role of sex workers’ support networks in New York City and here in Los Angeles. A respondent with years of experience locally and globally in SRHR issues opened the discussion with reflections on commonalities and differences in the law and global health nexus across these issues, and the implications for research, programming, and advocacy!

The event began with an introduction from Professor Sofia Gruskin explaining the importance of highlighting working around sexual and reproductive health and rights (SRHR) happening here at USC in the current political climate. With SRHR, the language that makes this work possible, as well as universities themselves, under attack by the Trump administration, she spoke about the actions that USC and the Law & Global Health Collaboration have been taking to foster conversation and build a foundation for progress. Professor Gruskin explained that the event would begin with brief presentations from each of the USC-based panelists—focusing on the law and health connections in global, local and transnational jurisdictions, respectively—followed by a dialogue between panelists and audience members that would be guided by a respondent. The idea being to begin to foster a sense of community and to think of what sorts of connection and research can be sparked by bringing together the work happening at USC in this area.

Professor Mellissa Withers on “Sexual violence as a weapon of war”
Withers, Associate Professor in the Department of Preventive Medicine, began her presentation by explaining that her proposal had been selected by the Law & Global Health Collaboration to put together a working group of USC faculty to discuss sexual violence as a prevalent and strategic weapon used in wartime. Withers explained that sexual violence in wartime has often been treated as an increase in individual indiscretions, rather than as an intentional tool used as a weapon of war by one side of a conflict to exert power over or humiliate another. She included several quotes to illustrate this point, including one from Margot Walström, the UN Representative on Sexual Violence in conflict:

“Sexual violence has become a tactic choice for armed groups, being cheaper, more destructive and easier to get away with than other methods of warfare.”

Professor Withers went on to identify Denis Mukwege and Nadia Murad —winners of the Nobel Peace Prize in 2018—as public adversaries of the use of sexual assault as a weapon of war. Professor Withers then provided several examples of rape being used as a weapon of war and spoke about the confusion surrounding the definition of sexual violence. Professor Withers explained that the term can refer to rape, sexual slavery, forced prostitution, forced pregnancy, forced sterilization or any similar form of sexual violence and that these differences are important not only to survivors but to determine legal accountability.

Moving on to the consequences of this phenomenon, Professor Withers elaborated on the fact that, in modern warfare, rape has become a strategic weapon used to humiliate, demoralize and dehumanize the enemy. Rape committed during a war is often intended to terrorize the population, break up families, destroy communities, and even change the ethnic make-up of the next generation. Stories about of women having been deliberately infected with HIV, forced to bear “the enemy’s” child, or displaced, both internally and across borders. Women, as well as children, have been targeted while fleeing to (or while they are in) camps. Concluding her presentation, Professor Withers noted that the consequences of using sexual violence as a weapon of war have affected not only the victims but entire communities as it ruptures social cohesion. Entire communities may be left feeling vulnerable and traumatized collectively by sexual violence. Work around these themes will form the basis of the Working Group she is leading.

Lauren Levitt, joined by Zooey Zara, on “Meeting People Where They Are: A Harm Reduction Based Approach to Services for Sex Workers”
Levitt, a PhD Candidate in the Annenberg school, began the presentation by explaining the importance of using a harm reduction framework, which she noted has often been used in cases of substance abuse, to promote the health and rights of sex workers. This is because the principles of harm reduction are consistent with a reduction of stigma-induced shame. Levitt noted that the six principles of harm reduction include “individual is treated with dignity.”

Levitt moved at this point on to a discussion of the pieces of legislation known as SESTA/FOSTA or the “Stop Enabling Sex Traffickers” and “Allow States and Victims to Fight Online Sex Trafficking” Acts, which make no distinction between sex trafficking and consensual adult sex work, and fails the health and rights of sex workers. At this point, Zooey Zara—director of the Sex Worker Outreach Project (SWOP) chapter in LA—took the floor. Despite being opposed by many organizations, both bills were passed. She noted that within two weeks more than twenty popular websites that adult, consenting sex workers had previously utilized for advertising and screening were shut down. Zara, citing data collected by COYOTE RI (2018), explained that sex workers have experienced a decrease in safety and a decrease in income since their passing. Identifying those who are victims of sex trafficking as opposed to consenting adult sex workers has also become more difficult for those who are working to reduce sex trafficking.

Zara, speaking on behalf of SWOP LA, expressed the position that sex work should be decriminalized if the safety, rights, and lives of sex workers are to be valued. She explained that this may be achieved through education and advocacy programs grounded in a harm reduction approach rather than abolitionist laws.

April Hovav on “Creating a Global Surrogacy Hub: The Case of Tabasco, Mexico”
April Hovav, as the final panelist, discussed the implications of the development of a global surrogacy hub in Tabasco, Mexico. Hovav began by walking those present through the timeline of events that led to the current situation—drawing a direct line between the outlawing of surrogacy for foreign, same-sex couples or single parents in India and other parts of Asia and the demand that led to surrogacy boom that now exists in Tabasco. To illustrate this, Hovav pointed out that in 2003, the first in-vitro fertilization or IVF clinic opened in the region, but it was not until 2016—after public awareness was heightened through the release of a documentary in 2012 followed by the crackdown in parts of eastern and central Asia in 2013 and 2014 on who could access surrogates—that legislation was passed in Mexico that restricted surrogacy to heterosexual Mexicans. Hovav made a point to mention that she had asked government officials who had passed the law in 2016 and no surrogates’ input were taken into account when criminalizing foreign surrogacy. Despite the law, she noted that many found Tabasco still more open to parents outside of a traditional heterosexual couple than other surrogacy hubs.

Hovav noted that it was not only desperate parents that create a demand for surrogacy services, but that international surrogacy entrepreneurs look for options when the international landscape for the market changes dramatically with untold impacts on the poor women who serve as surrogates. The surrogate mothers, in this case, are mostly from Tabasco but sometimes come from other parts of the country to take part in surrogacy and then come to Tabasco for the last few months of pregnancy so that they can give birth where surrogacy is legal. After key individuals in the region reached out for legal support, the word got out and doctors, lawyers, and other professionals began traveling to the area for work and would be parents from many parts of the world realized Tabasco was a surrogacy hub. Prior to this, there had been only one international flight that was available for travel in and out of the region. Hovav wrapped up the presentation by noting the effect that the commodification of pregnancy may be having on the perception that women in the area have of their own bodies as “for rent,” and the profound ways in which legal decisions in one part of the world can affect the lives of people in other parts of the world.

Commentary from respondent Sarah MacCarthy
As the event respondent, Sarah MacCarthy thanked the panelists for their contributions to the field and briefly spoke in response to each presentation. In discussing the importance of an “action-oriented approach” to these issues, MacCarthy noted that mapping out the problem from a human rights perspective is a useful tool for the management of the responses. She emphasized the importance of the law, but also the need for a focus on how the law is being carried out in human rights terms, such as in relation to non-discrimination, participation and the availability, accessibility, acceptability, and quality (AAAQ) of the services for all those involved.

MacCarthy moved on, at this point, emphasizing the importance of those involved in data, research, and policy asking themselves “what’s next?” She spoke about the use of a rights-based approach to bridge the gap between rights and services in SRHR work, as relevant to the work of all the panelists present.

In specific response to Lauren Levitt and Zooey Zara’s joint presentation, MacCarthy mentioned the obstacles faced by Latina trans women in sex work—namely, the continued use of the “2 condom rule” by LAPD despite the practice of using the possession of more than two condoms as evidence to justify arrest being banned—as an example of a space where there is a gap in policy versus practice.

In response to April Hovav’s presentation, MacCarthy named the principles of non-discrimination, equal opportunity and privacy as a few that should be considered as helping to support a frame for research and action. She expressed that, as an issue of autonomy, there is a need to ensure that actual women are protected, heard and able to engage in surrogacy by choice.

At this point, the floor was opened to the audience members to engage in conversation with the panelists and several questions were asked of individual panelists.

Professor Gruskin asked the room at large to discuss any related research which was being done. An audience member based at UCLA spoke about their collaboration with SWOP LA and the work that they have been doing with migrant sex workers in several countries.

The conversation then moved to potential collaborations, as April Hovav mentioned that the harm reduction approach might work well to avoid stigma in her work with surrogates. Zooey Zara, at this point, draws a parallel between her own experiences in sex work and with transactional egg donation and the way that social service workers treat both populations.

There was then a brief discussion of funding and resources in SRHR work. Sarah MacCarthy noted that donors do not always respond well to human rights language, but that human rights-based approaches can nonetheless be successfully funded. Zooey Zara responded that projects to support sex workers are often not seen as fundable and therefore there is often a struggle to find sufficient resources for the work. The event ended with a summarizing statement from Professor Gruskin on the importance of continued conversation and collaboration on these issues and others around SRHR.

The USC Law and Global Health Collaboration would like to sincerely thank all panelists and active participants for the valuable insights and for contributing time and expertise to our event. 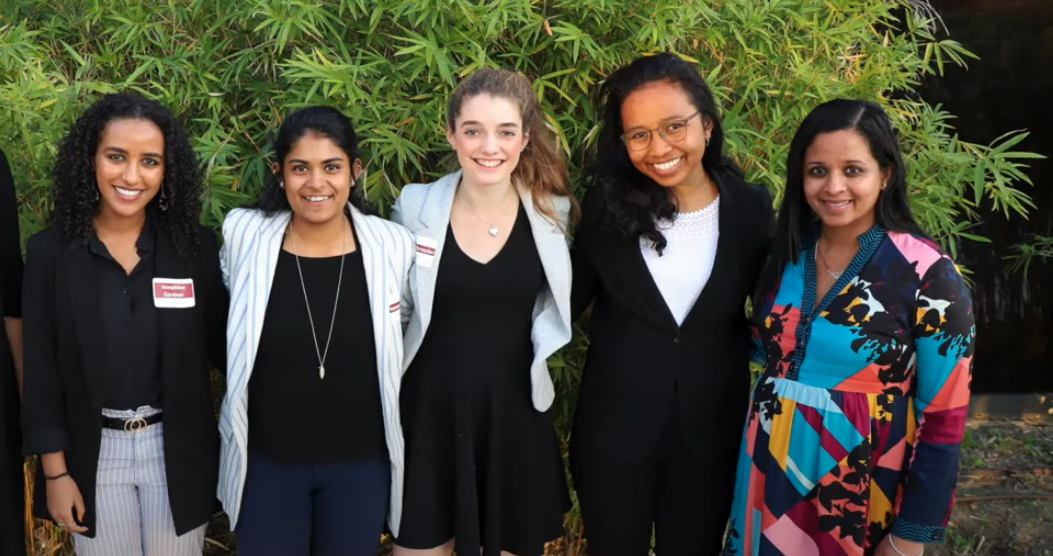