Click here to read our statement reflecting on the implications of the recent actions of the U.S. Supreme Court.

The overturning of Roe v. Wade in June 2022 was a significant blow to addressing inequalities in the United States and beyond, and a call to action. Since the decision came down, IIGH has been intensely focused on leading efforts to mobilize action on reproductive health and rights beginning locally in Los Angeles, and extending out to the global, as we anticipate the potential repercussions to sexual health and rights beyond our borders. IIGH faculty have published widely on the realities of abortion provision in a post-Roe world, and the Institute will continue to serve as an incubator for new research, knowledge sharing, and as a partner for those most impacted by the Dobbs decision. Finally, we have placed increased attention on creating space for students to come together and strategize on the actions they can take to advocate for abortion services and provision in California and beyond.

Below are some of the events we have hosted for our Lecture Series this fall to shine a light on sexual and reproductive health and rights (SRHR) issues in Los Angeles and around the world. They brought together scholars, practitioners, clinicians, activists and students who seek to forge a collective vision for a society where all people can achieve the highest attainable standard of health. Our commitment to addressing the health and human rights issues of abortion provision will continue into the coming year — stay tuned for more!

To kick off the 2022-2023 IIGH Lecture Series, we hosted activist, scholar, and MacArthur fellow Loretta J. Ross for the event “Learning from Our Histories: Activism in a post-Roe World”. This discussion focused on the importance of abortion as both a health and a human rights issue prior to the 1973 passage of Roe v. Wade, during the several decades when abortion was legal, and now given the recent Supreme Court decision.

In October, IIGH convened a virtual panel of clinicians, civil servants, and activists focusing on the provision of abortion services in Los Angeles and across the United States, including states with laws that severely restrict access, such as Indiana and Texas. Discussants considered the realities of abortion provision in a post-Roe world, including the options available to individuals whether they are seeking medical or in-clinic abortion services, with attention to the legality of abortion provision in different states and across state lines. With medical evidence as its starting point, this panel contributed to a broader understanding of the changing landscape of inequalities in health and health outcomes within and between cities and states in the United States brought about by the Supreme Court’s recent ruling in Dobbs v. Jackson Women’s Health Organization.

IIGH convened a virtual discussion that brought together practitioners, activists and scholars engaged in addressing the current legal and political landscape around abortion in the United States and beyond. Panelists provided insight into state differences in legal restrictions, political action seeking to secure access in this complex legal environment, and the implications of the US Supreme Court’s decision in Dobbs for securing access in other parts of the world.

Finally, IIGH brought together a multidisciplinary panel of faculty from across USC to discuss the broad social and economic implications of the Dobbs decision. Informed by the outcomes of the midterm elections, USC experts provided insight into the current political landscape and the potential long-term ramifications for marginalized and vulnerable communities. In conversation were Manuel Pastor, Director of the Equity Research Institute; Parveen Parmar, Chief of Global Emergency Medicine at Keck; Daria Roithmayr, Professor of Law at the USC Gould School of Law; and John Blosnich, Director of the Center for LGBTQ+ Health Equity. 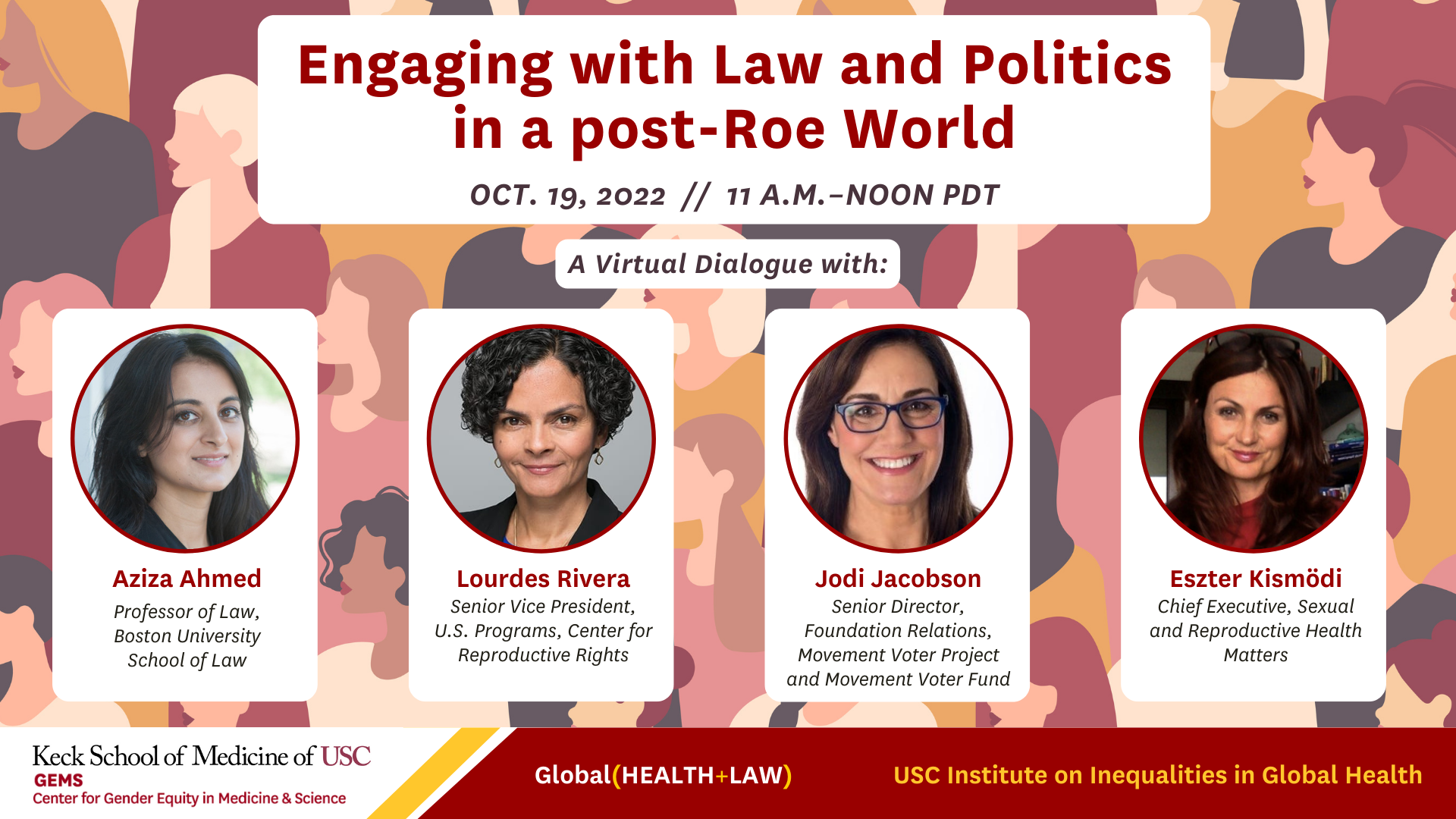